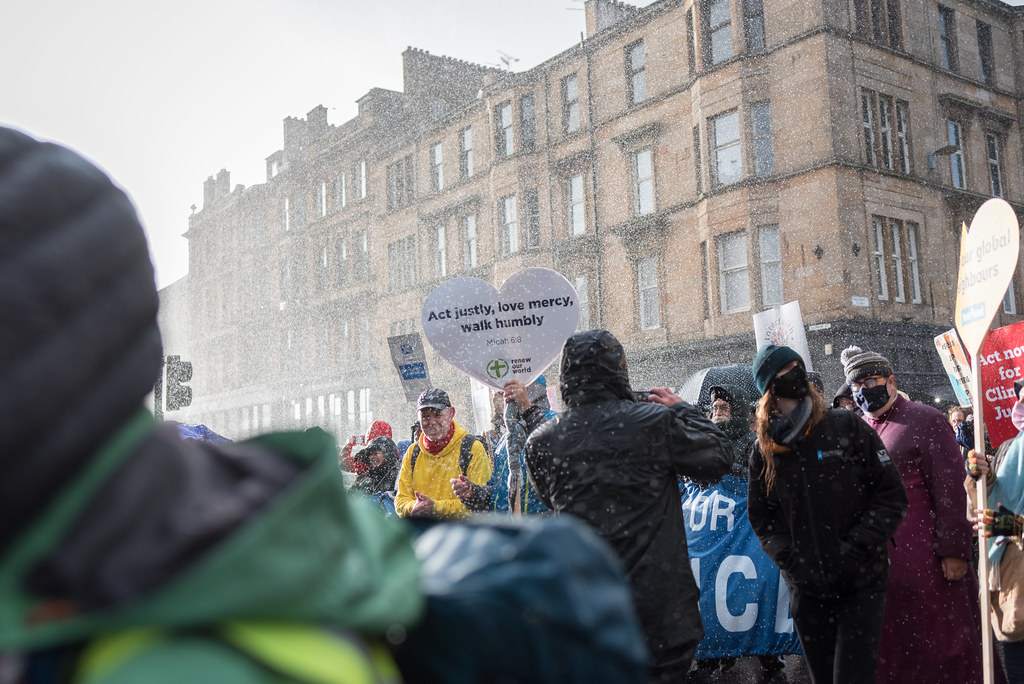 COP26 is over and the different parties are arguing about whether it was an absolute success or an absolute failure. The reality is probably somewhere in between although for the poorest and the planet, time is not on our side. I feel privileged over the last two weeks in Glasgow to have met so many amazing, astonishing people. But I am also aware that many who should have been there – people most impacted were not able to be in Glasgow.

Like others, I am exhausted and probably not in the best of places to look back. That will come, in time. But I don’t want to waste too much time looking back because we cannot change the past – although we can learn from it. The future is still there to be changed.

As I look to that future I feel I must begin with lament at the accelerating devastation for the poorest and the planet. Progress has been made at the 26th Conference of the Parties (COP26) in Glasgow but it is nowhere near enough, and nowhere near fast enough.

Millions will die because of our inaction. Increasing parts of our planet will become uninhabitable. The science is irrefutable. This is ‘code red’ for humanity. When we need, more than ever, to act together, populist nationalism is on the rise. In the closing plenary of COP26, small island nations such as the Maldives spoke of too little, too late. A way of life is disappearing as the waters rise. And yet the funds promised in 2009 remain unpaid whilst all the time the cost rises and the damage become irreversible.

COP26 took place in my home city of Glasgow and, along with thousands of others, I have thrown myself into these last few weeks with the belief that a better world remains possible. I was privileged enough to be appointed as COP26 Ambassador for Glasgow Churches Together. The title sounds far grander than it was. The role was about holding the door open for others with more to say, with a particular commitment to learn from those from the Global South and from young people. And I have been more than happy to fulfil that role.

Some of my time was spent within the so called ‘blue zone’ of the conference with an observer status to the negotiations. If I am honest, I found the experience overwhelming. It was incredibly difficult to make any sense of what was going on and, for much of the time, it felt more like a gigantic trade show rather than a gathering of people ready to face up to our collective responsibilities. This was touted as the most inclusive COP ever, but it didn’t feel like that. People were locked out of too many rooms, and even when we were allowed in them, the conversations didn’t seem to make a lot of sense.

There were, of course, highlights. The chance to hear and meet Katherine Hayhoe and Bill McKibben, two people whose writing and wisdom I have long admired. The chance to be in the room as Vanessa Nakate delivered one of the most powerful speeches I have ever heard. Or will ever hear. And sitting on the floor with some children from the Amazon as their mothers spoke poignantly about the destruction of the lands they have called home for thousands of years.

Most of the highlights, however, were not in the formal sessions, or even within the conference venue. They were in halls, and churches, and on the streets. The privilege of welcoming pilgrims from across the world to Glasgow; of sitting at the feet of inspirational young people from the Young Christian Climate Network and Climate Justice for All; of making new friends with people from Bangladesh, Fiji and Panama.

It was on the streets of Glasgow that I learnt my deepest lessons. It was a sea of humanity, people from every nation and a constellation of different interests and groupings. The silos, so frequently obvious within the formal negotiations, were broken down. Young and old. People of all faiths and none. Environmentalists. Trade unionists. We were together for the planet, led rightly by indigenous communities who have lost so much and have so much to teach.

Within the COP the closest I came to a similar experience was on the final morning when a People’s Plenary took place, resulting in many delegates walking out of the COP and meeting up with Extinction Rebellion at the gates. It was a moment when, for me, the proceedings finally burst into life.

Something similar happened at the Marrakech Partnership the day before, a gathering of those who are not formal parties to the negotiations but who nonetheless have a vital part to play in tackling climate justice.

This was the penny-dropping moment for me in the entire fortnight. I realised that nation states, despite the heroic efforts of some, are probably incapable of acting in truly collaborative ways. The ability to do that rests instead with those who either operate at a micro-local level or who operate across boundaries, focused on global citizenship rather than national self-interest.

So whilst I will lament, I will not give up the quest for a better world, alongside those who are the victims and the creators of a better future.

To reimagine the world today into the world of tomorrow as it should be, we need to enable the global transfer of wisdom amongst those so often excluded but who have so much to share.